The current Araluen Hotel was originally a General Store circa 1870 and was converted to a Hotel in 1928, after the old Araluen Hotel burnt down. Gold was discovered in the area in September 1851, this led to a gold rush. Within months 15,000 people descended on Araluen. During the first year it is estimated 100,000 ozs of gold had been taken.

In the 1860’s and 1870’s there were as many as 42 registered hotels (and many more unregistered venues), butcher shops, general stores, bakers, blacksmiths, police stations, courthouse and many other small merchants. In the early 1900’s there were up to 11 dredges working the river. The gold fields remained productive up to the 1920’s.

150 years ago the poets Charles Harpur and Henry Kendall wrote praises to Araluen as the “Happy Valley” and the “Valley of Peace”. Today’s travellers may not see much evidence of its gold mining past, but they will find the beautiful and tranquil valley they loved.

If you are seeking to stay at the Araluen Hotel now, comfortable accommodation is available, with nine rooms, sleeping singles, doubles, families or groups. The rates are reasonable and includes free Continental Breakfast. Group deals are available.

The Araluen Hotel offers a welcoming bar with cold beer on tap, lunch and dinner 7 days a week (with Sunday roasts), smoking verandahs, an undercover beer garden,  games room and dinning areas. There are two cozy fireplaces that run during the winter months. 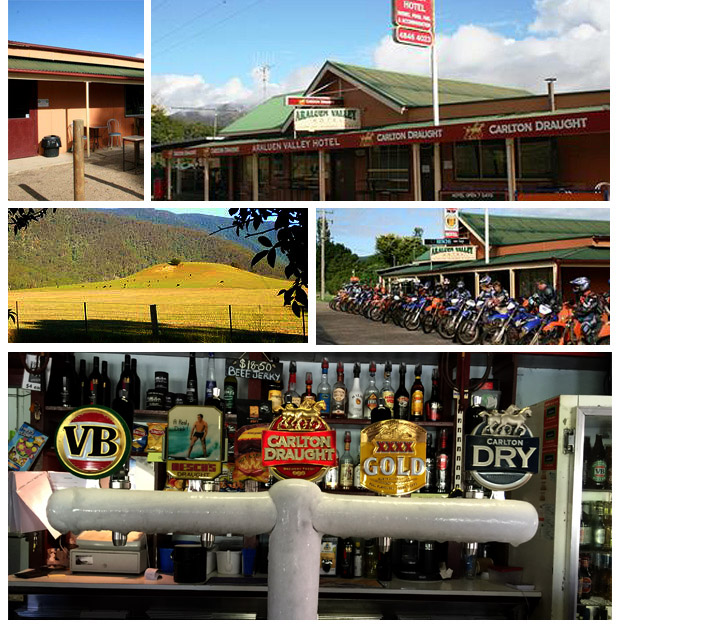